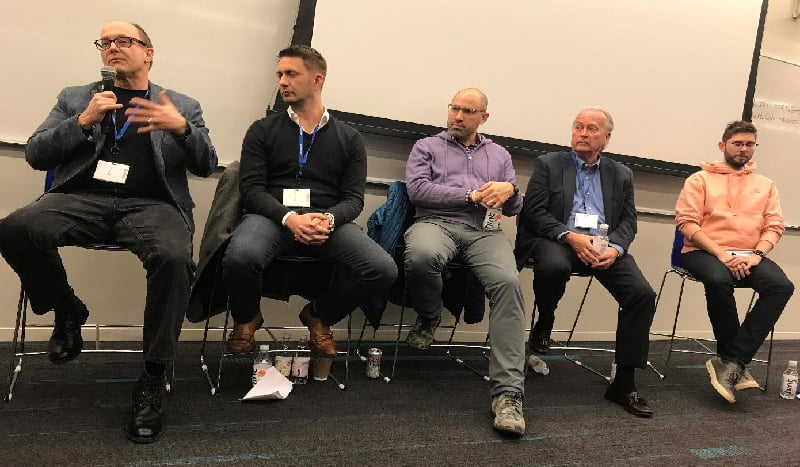 Our January 29th panel on AI and IoT at Microsoft Technology HQ in midtown NYC was a blast—the discussion was lively, the audience questions were great, and the takeaways were fascinating. Here are some of the highlights from Monday’s panel!

WHO OWNS OUR IDENTITIES?

With all these connected devices tied to our identity, I wanted to ask: does your identity belong to you, or to the people who are monetizing it? What do you think the key issues, potential solutions, and challenges will be as we assert control our identities?

After counting the raised hands, Edgar told the room a story about meeting with the mayor of a city, during which the mayor pitched an idea to him: citizens upload their phone bill to something like Edgar’s smart-city data management system, and the city lowers property taxes in return for the ability to sell that information to interested companies.

This scenario brings up a key issue when it comes to IoT: all of our connected devices are going to be collecting information about our daily activity, which will inevitably be collected by the owners of those devices to build profiles for each customer, which can then be sold to advertisers and more.

So the question becomes: who really owns our identities, and what are the boundaries?

According to Mark Clifton the US is different from the rest of the world, both legally and culturally, when it comes to this question. “In Europe, they trust the government and distrust companies,” he said. It’s the opposite in the US, however—companies like Facebook and Google are given access to all kinds of private information.

“Europeans are very close with their identities,” Clifton said, and European society has very progressive laws protecting privacy. On the other hand, only three states in the US restrict collection of biometric data. This prompted Clifton to say that the most important development coming up in IoT will be whether or not people have the choice to keep their data private or not. “I don’t think we have the choice today,” he says.

This prompted Nick Adams to remark that consumers should be able to “buy the right to be forgotten,” essentially removing them from companies’ data records. Adams believes “we’ll have the option to opt out” of data collection, too– “We’re going to have to create boundaries with our devices and our data,” he says, but the responsibility to do so will be our own.

CAN DATA BUILD A BETTER FUTURE?

After wrapping up the discussion on the previous question, Maguire asked the following:

We’re collecting and storing all kinds of data like this for the first time. What are some use-cases that give an optimistic view of the future?

Bruce Weed jumped on the question by bringing up the topic of healthcare, a recurring point of optimism when it comes to IoT. According to Weed, he observed a hackathon that involved a large amount of publicly released healthcare data, which was organized with the help of AI. Access to this kind of information, paired with an increased ability to make sense out of it, could trigger the next breakthrough when it comes to preventing diseases, tracking the health of thousands of citizens, and finding new insights in patient data.

Weed brought up the potential for analyzing real-time disease data in cities in order to deal with recent outbreaks like Legionnaire’s disease. This could involve sensors on water towers as well as the use of drones.

Nick Adams took the discussion in a different direction by outlining some ways IoT could make the transition between work and life more seamless. He mentioned creating technology that allows each person in an office to control the temperature of their workspace during the summer and winter (being born in Boston, he says, has made him perpetually cold).

Mark Clifton, however, had a much larger vision for how the collection of biometric data will change the face of India. According to him, India’s biometric identification program includes 1 billion people, and is vital for their distribution of entitlements to poorer communities. The future goal, he says, is to transform India into a completely cashless society.

Meanwhile, rulings in India’s supreme court have determined that all citizens have a right to privacy, meaning that their identity belongs to them, not those who collect it.

HOW IS TECHNOLOGY CHANGING US AS A SOCIETY?

Maguire’s next question was more wide-ranging:

What is technology doing to us as a society? How do you feel that we can apply the tools we have at hand (human or technological) to offset the negative trends brought about by disruptive technologies?

John Edgar opened the discussion by mentioning his long-time struggle with dyslexia and how text-to-speech and other technologies help him deal with it. For Edgar, the real promise of technology is serving those with niche needs who are often forgotten by larger-scale technological advances: “We’re all so different inside, but outside we’re shades of grey, [so] what we do in technology is try to find solutions for a shade of grey, not people of color, women, dyslexics…”

For Maguire, the impact of technology on those who have lost limbs was one of the most striking examples of technology as a force for good. He brought up his own personal encounter with a British sheet metal worker who had lost an arm and had been plagued by insecurities when going out in public. The man had received a 3-D printed arm, and Maguire remarked on how greatly it had improved his life (and how he had taught the man to give a “New York hello” by raising the prosthetic’s middle finger).

LOOKING TOWARD THE FUTURE OF TECH

One of the most interesting audience questions was “What are you seeing that excites you most in terms of technology, and why?”

For Bruce Weed, it was quantum computing: “I think it’s going to be the next breakthrough when it comes to horsepower in computers.”

For Nick Adams, it was transportation, especially in Dubai. Adams mentioned the hyperloop as a particular technology he’s looking out for.

For Aaron Price, it was 5G and how it will help new businesses. The best technologies, he said, are the ones that humanize technology.

For Mark Clifton, it’s how technology is “really screwing up the system,” especially Venmo—“You’re making…bankers…crazy,” he joked.

John Edgar had this to say: “I think we’ve done a terrible job applying technology to society. We’re nearing the end of a period where we can pretend everything is okay.”

Join the Disruptive Technologists Meetup and check back here on the DT website for our next panel!